Magazines Are Killing Themselves… And Fashion

In its recent issue, Vogue US has a feature on Noor Tagouri; activist, journalist, speaker but next to one of her pictures is the name Noor Bhukari. VOGUE US had misrepresented and misidentified a Muslim-American journalist who speaks on misrepresentation and misidentification; the bloody irony! This is not the first time Ms Tagouri has been misrepresented, and it is not only by Vogue but often times, when one is seen as “other” the need to get things right when it comes to identification be it of race, sex, culture, religion etc. is often low on the totem pole because we don’t matter, we are not the default therefore why should they bother. Harsh? I don’t really care.

There’s an opinion going round about instagram being the death of fashion, I read an article written by one of my favourite journalists, Lauren Sherman, for Business of Fashion in regard to the rise of Instagram and its correlation to the death of magazines, somewhat. Ms Sherman is a person I both admire and respect, much of her work is supreme and some of the best writing with regards to fashion journalism, but in this case I have to disagree. Magazines are solely responsible for their impending death. I get it, with the rise of Instagram and the insta-famous, nothing is sacred, fashion no longer seems so hallow looking from the outside in. Matter of fact why would you want to be in on an industry that refuses to get with the rest of the world? The only thing Instagram is guilty of, is providing a platform that evens the playing field. Maybe the filters could be updated and that shitty algorithm gotten rid of but that’s it as far as we can leverage the blame at an application that gives its users a cheap thrill. When it comes to their deaths, magazines hold the gun, motive and are the judge, jury and executioner. Editors got sloppy and lazy, and way too invested in the hype than elevating their point of view.

However, depending on how we look at it, magazines aren’t dying, not entirely anyway, right now they are stuck in cardiac arrest in hopes of resuscitation and if they want to, they can still be revived.

When it comes to identity, lifestyle and culture, fashion magazines plays an important part in the discuss, an informative role, one that cannot be replicated in most mediums. It goes beyond the fashion shoot and editorials, and with the age of technology, the rise of magazines should be in tangent because they occupied spaces prior to the digital boom.

But they refused to grow. We are in the first month of 2019, and still at a point where the appearance of a Black person on the cover of a magazine is a cause for applause. In Februalry 2018, for the AW presentation model Anok Yai opened the runway for Prada, before her Naomi Campbell played the same role in 1997, some twenty years before. In February 2015, Jourdan Dunn was on the cover of Vogue UK, the last time a Black woman was the solo model on the cover of British Vogue was in August 2002, Naomi Campbell, some twelve years before. All this in the twenty-five years of Alexander Shulman’s tenure as Editor in Chief of the magazine. For her cover Dunn was styled in a way that diluted her Blackness with a strawberry blonde wig (whatever the colour is) and fashioned in a way that said her Blackness was not palatable to their audience. For feburary 2019, Dunn and Stormzy grace the cover of Elle magazine, Dunn looking markedly different in style, tone and attitude to what she was made to look like on British Vogue. In other words, she looked like a Black woman. With Enninful at the helm of Vogue UK his first issue rewired the way in which Britain represented its fashion landscape, showcasing the diversity and cultural hub of Britain, the many tones and shades that make up the country… something Shulman was unbothered to highlight.

Fashion magazines don’t care to understand the role they play in the larger narrative of society and as such fail to accept their responsibility in the grand scheme of the conversation. They speak for the millions of women who read the content of their glossy pages weekly, monthly, and otherwise and a failure to hold brands such as Prada and Becca- who came in the line of fire for painting a white model black to in order to swatch darker shades of make up- accountable for their actions makes them culpable and enablers. Terry Richardson, for all the abuse allegations against him, is still associated with fashion magazines. Elle US had to reshoot the January 2018 issue with Zoe Kravitz, October 2017, after Richardson shot it under the editorship of Nina Garcia. Only when the allegations against Harvey Weinstein, came to light did they take action. Allegations against Richardson surfaced in the very early 00’s. 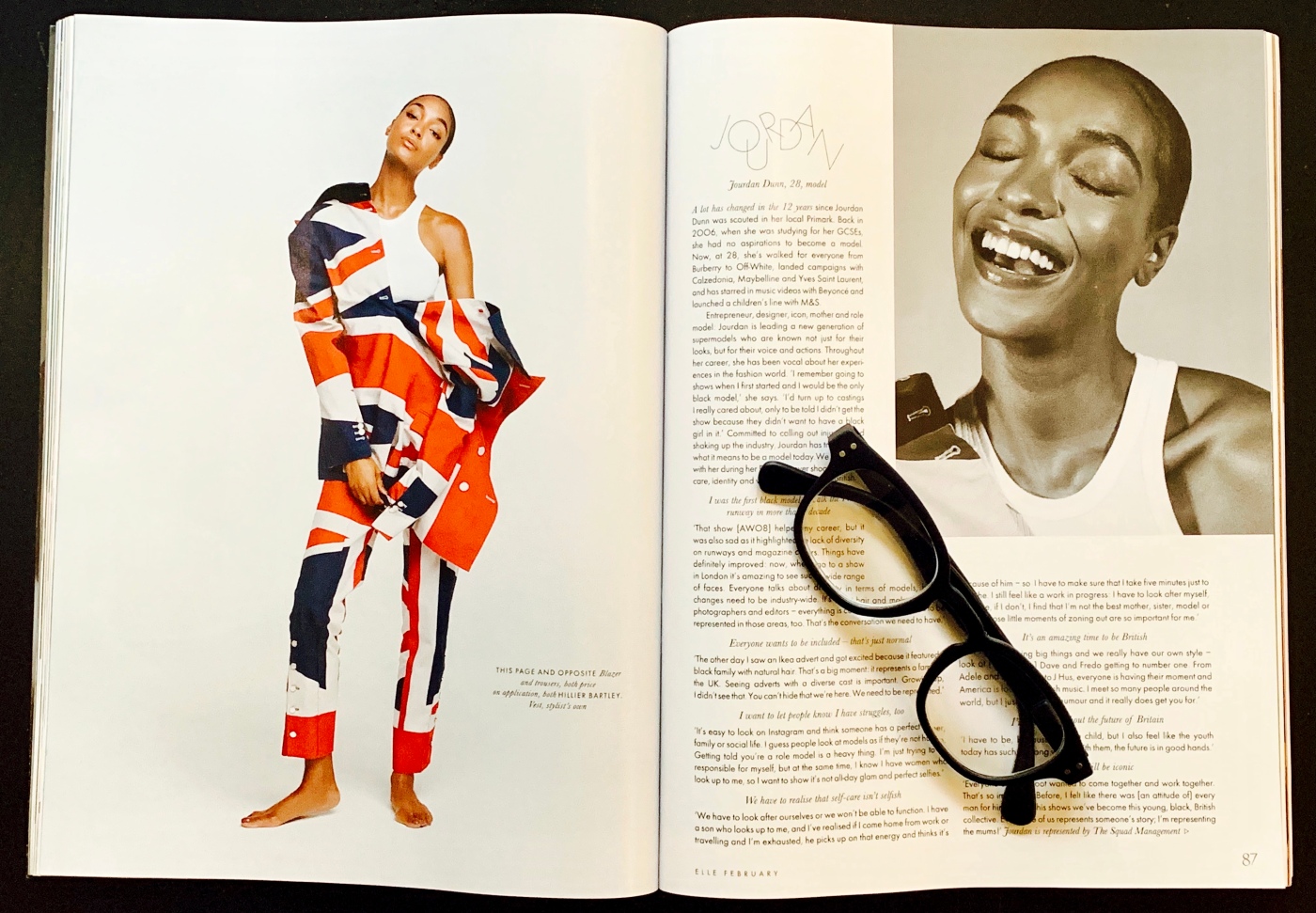 We live in highly charged political times, the press is under even more scrutiny than before, the fashion press is no exception. Content is lacking in diversity that should be reflecting the world we live in today, they fail to acknowledge the growth of their audience, to understand that we can be both politically inclined and love a good red sole shoe at the same time. Flicking through a magazine’s editorial pages, one would be hard pressed to find a Black designer included in the line-up. They do a disservice to their readers when they continue to churn out flat content. Acknowledging a growing and diverse readership is not only akin to their survival, it is smart investment because it shows the ability to accurately represent and navigate cultural nuances of their varied readership.

I do believe there’s hope to be had for magazines; Instagram, for all its influence, is increasingly becoming overly-saturated, the bigger influencers are no longer seen as arbiters of taste because it is a cacophony of sponsored posts that blur the lines of authenticity. For magazines, the steps are really simple; hire a diverse team, represent the readership, reflect the change in the world as we know it. Have a plethora of voices around your tables to bring a different perspective to the conversation whitewashing the conversation no longer works and is no longer acceptable. And for heaven sake hire fact checkers!

The death of fashion magazine, and fashion to a large extent, should be directed at the Stylists who fails to include other designers than the default in their line-up, make up artists who does not have the right shade for the Black models, because the default is white or whiter, the agent who refuses to send Black girls to casting, the designers who fail to insist upon a varied and diverse cast, and last but by no means least, the Editor who allows these images to perpetuate a story of sameness without depth. Blame them all but leave Instagram out of it.

Perfection. I’m just a girl, who found some spelt flour and now here we are. This might be the most perfect brownie. . Until a few years ago I wasn’t a fan of the brownie. Dark chocolate for one and a lack of understanding of the point of the brownie for another: don’t ask 🙄. . But in these days of isolation I’ve maybe come to a better understanding of the brownie: it’s happy food. It’s sharing food. Something that brings happiness to others. It something you can easily make to give to a neighbour, a friend, colleagues etc. As a way to say thank you, or whatever the message. Or something you can just whip up from the dregs of your pantry. It’s easy. . . . . . . . #brownie #baking #food #saturday #feelslike #itshouldbe #family #sweets #dessert #quarantinelife #happyplace #goodvibes #anotherbrownie #icecream #happyfood #together #sharingfood #baker #athome
Still on that #pantryaunties ish. Today is wine bottles. Ikea FINALLY delivered the racks. As I don’t have a cellar we make do with walls and floor space. My next home will have to have a cellar because I do not intend to stop collecting wines as I travel. . . . . . . #pantryaunties #wine #cellar #nocellar #floorspace #organising #home #poppingbottles #quarantine #safeathome #washhands #drinkwine #sleep #repeat #traveller #memories #greatconversations #friends
Innovation. Fashion. @hanifaofficial elevating and killing the game. Incredible. . . . . . #fashion #innovation #african #congolese #technology #hanifa #beautiful #black #milesahead #insane #gorgeous #moreplease
I miss outside so much. I miss getting on the train and even it’s shitty service. I just really want to wear my summer dresses again. Oh corona. Basta! 🥀 . . . . . . #talesfrominside #summer #indoors #dresses #quarantine #evenings #enoughnow #safeathome #stayhome
3 ingredients cocktail with the main attraction @mirabeauwine rose gin. It’s a banger. Shot glass . Rose and raspberry mixer . Rosé gin . A berry jam of some kind. This is one champagne and cherries. . Ice . Shake . . . . #cocktails #eveningaperitif #drink #midweekdrinking #pinkgin #rosegin #mirabeau #sodelicious #quarantineactivities #stayhome #gettipsy #behappy
This is such a happy post!!