Bloggers & Vogue- Fashion Does Not Live By Vogue Alone

Someone tell this to Vogue because it missed that crucial lesson in fashion 101. There’s this war raging, a recurring war in fashion that’s been raging from 2009 presumably, when the first shots were fired by Anne Slowey in her dismissive comments about Tavi Gevinson of style rookie sitting front row at Rodarte. Then Suzy Menkes echoed much the same sentiments a few years later in her description of blogging and certain bloggers who’d carved a niche for themselves and were quickly becoming main stays on the front rows and with designers. This battle fashion editors cannot walk gracefully away from. It’s very old money versus new money, bloggers being the new, and as such the thorn in the side of old school fashion editors who clutch their pearls and roll their eyes at the mere mention of the word; blogger. I’ll give these editors a point; yes, street style has become a cacophony. Something which evolved organically has become a carnival of peacocks, to borrow the word from Suzy Menkes, with bloggers, influencers and editors alike trying to out flounce each other, the scene made even worse by the photographers falling over themselves to take that money shot or meet deadlines for the street style inspiration posts for online publications such as Vogue. All this noise has made street style lose its substance and the fun this all once was, but this takes nothing away from the hustling phenomenon of the fashion blogger/influencer. It is to the testament of this hustle that they have become even more of a force to be reckoned with.

“Find another business you are heralding the death of style” Sally Singer said in the blogger smack talk pile on, a statement that reeks of jealousy, pettiness and fear. Style died the minute magazines began dictating what one should and shouldn’t wear, season to season. Isn’t style meant to be a freedom of expression? The dictation of how this should be expressed is the death of style not the bloggers who are expressing themselves as they please, circum-navigating the dictates of the hell bent old guard traditionalists of the fashion industry. For years Vogue has coasted on its reputation as the “fashion bible”, has become comfortable in the knowledge that the status quo will remain the same and that its history would keep it safely at the top for as long as it possibly could, boring us to death with its constantly vacuous content of even more boring nonsense. The formula worked for a time; churning out the same old stories, same old cover stars, and one dimensional tones, but then came the internet and with it, forever. It brought with it an alternative to the quo, ruffling the pretty peacock feathers of the traditionalists who were averse to change and the new. Bloggers were looked down on a certain way, talked about with a certain disdain, the welcome was cold, but their hustle was and remains undeniably strong and soon enough they ascended the ladder. I suppose this must rob the old school elites up the wrong way, the old guard who felt scorned by the quick ascension of these bloggers to the front row whilst they spent decades going from row 3 to 1. Bloggers did not come up the traditional route, did not pay the same dues, yet they caused a disruption to the finely trimmed edges of fashion, brands took notice, and with the dawn of social media a bigger audience was up for grabs. An audience ready for something different, outside the box; Bloggers were way outside the box. 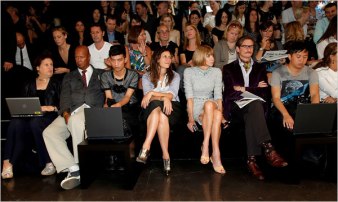 Fear, is a debilitating quality to have. People fear what they don’t understand and loathe what they cannot conquer. Fashion editors have failed to grasp an understanding of blogging and cannot conquer fashion bloggers, especially not when they have come to be seen as one and the same with them, the blogger maybe even more influential than the editor. The change to the landscape has toppled that crown from fashion’s perfectly bobbed and painfully boring head, but this is what happens when complacency settles in and brings along with it embarrassing attitudes that lead to school yard, mean girl antics. Vogue has been found to be redundant in its effort to hold on to that crown and these nasty comments only reveal the extent of that redundancy and exposes the deafening levels of hypocrisy from people who get paid just like bloggers to wear clothes and appease their advertisers. Find another business did she say? Chiara Ferragni of The Blonde Salad is reported to make millions a year, Rachel Parcell of Pink Peonies was reportedly responsible for $1million in sales on Nordstrom online over the holidays, Garance Doré has become more of a platform than a blog, as has Liberty London Girl’s Sasha Wilkins. One would say these woman are the business and it seems a fair exchange, a reasonable expectation; to get paid for the job they do so what seems to be the problem here?

The problem with Vogue and its counterparts is basic; a continuous failure to truly understand that fashion in its entirety is ever evolving. It has evolved way past the glossy pages into something unpredictable and in a world where everything is immediate and pin sharp it makes for a lot of noise. Another fundamental part about fashion is that it is a business, not simply a show and tell of clothes and handbags; to stay in the game you have to make money, and you don’t do so by waiting for Vogue to decree your collection worthy anymore because it does not carry the same weight as when an influence like Chiara Ferragni gives a shout out to a product that is sure to sell out within seconds. With the onset of blogs, fashion has become democratic, people have a choice between Vogue and other platforms and outlets, be it a blog or an Instagram feed. Democracy brings with it an autonomy to choose whatever it is one wants to be influenced by. Furthermore, the landscape is rapidly changing and fashion is still trying to find its footing in the new world order where one minute is as uncertain as the next, half of the industry is digging its heels firmly into the ground of the traditional style of shows and reviews, whilst the other half is swaying with the winds of see now, buy now model because nobody knows what works, one formula does not fit all. Much like Vogue does not serve the appetite of its readers any more. Influencers continue to rule the roost with their Rise filter. Girls with millions of followers that can easily influence the most influential of minds into parting with their hard earned cash are the ones with the real power. Fashion editor? Who knows. Blame also the digital revolution.  The chasm between traditional fashion and the digital world grows wider every day, every day there is a more immediate platform to get news from, there is a new app, a new filter, a new something or other that is shinier than the last and will be as redundant in the next five seconds once the next new comes along; Vogue simply has to learn to keep up. What is more disingenuous is the same magazine that continuously lauds these insta famous girls, puts Kim Kardashian on its cover after years of disdain, has often always put celebrity on its covers as opposed to models- matter of fact they started this trend, and bestowed its hallowed September Issue cover with Kendall Jenner, which says it all really, is the one who has a pop at people daring to do the same for their careers and more. Come on!

Let’s dial it down a notch. Times have change, the industry is not beholden to Vogue anymore, bloggers have changed the lay of the land, but it does not make publications any less relevant to whom they matter, blogs simply are an alternative, an addition to the democracy that has become fashion, but make no mistake they are in it to win it, and here to stay. They have proven time and again that there is more to fashion than having the girl of the moment of your covers and in the wise words of Grace Coddington, “you have to learn the way to beat your path through, to make yourself felt and make yourself necessary…” Yer hear that Vogue?