This lasted much longer than I anticipated it would, but when his return was announced and his first collection was shown, I thought it was only a matter of time before Slimane would leave YSL. Let’s be real here people, let’s be really, really real here- he cheapened the brand.

Hedi Slimane chose to render confusion in YSL with his collection of tatty looking clothes for commercial success. He took it to the street, the clubs, the rave and wherever else in his head. He made a lot of noise and irritated a lot of people. No imagination whatsoever; Lumberjack shirts? Really? His efforts made money for Kering, which at the end of the day is what any business should do, but it did nothing for the reputation of Yves Saint Laurent the brand. That collections looked like Slimane was inspired by Primark, like something to regret the morning after a night out on the tiles. A mess. 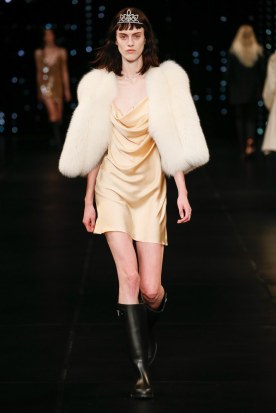 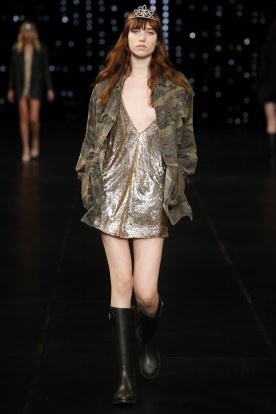 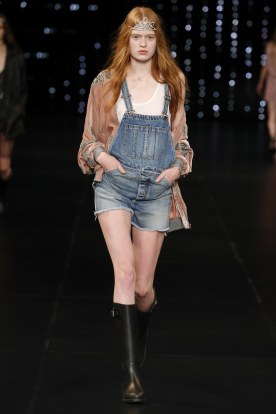 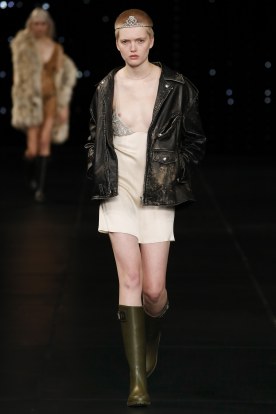 Following his departure there was much speculation as to who would replace him, every name from Alber to Simons was tossed into the mix but those seemed too tame and too expected. Anthony Vaccarello, was named Creative Director a quiet, not unknown, mellow player with chops. The fact that YSL has erased all traces of Hedi Slimane on its Instagram page is an odd but not all together silent reaction from the brand or maybe its their way of consciously welcoming its new Creative Director and acknowledging the new era about to entered, much to the ire of Slimane’s core fans who find such a move disrespectful. Yet, sometimes one needs to wipe the slate clean in anticipation of things to come. Vaccarello does not come with his own background noise, besides his tenure at Versus, working under Lagerfeld at Fendi, he also heads up his own brand, of a similar aesthetic to Slimane but of a more tasteful slant. He might have a different idea all together for YSL. He should. Not by looking to the past, it hold nothing, but moving forward, pushing past Slimane’s hip obsession and finding that something that can still bank the bills and return panache to the brand.

Credit where its due, Slimane put money in the bank for YSL, making it a top performer for Kering. Between 2012 and 2014 under his tenure revenue grew by 20% year to year, far out performing the other brands in Kering’s stead. His clothes always seem to raise brows from the fashion cognoscenti but also raised the bank balance even higher. In 2015 sales for YSL went up to a staggering $1b and in the last quarter of the year sales came in over 25%. Without question he did something right; brought the brand out of its rut but at the cost of something more. He isolated a core that was admittedly not spending money with the brand, and brought in a new consumer that would- in a lot of ways one cannot argue with that. 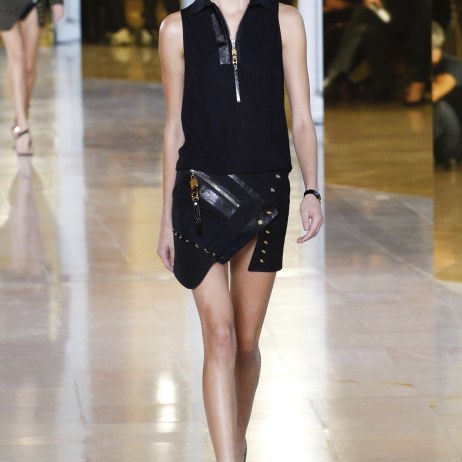 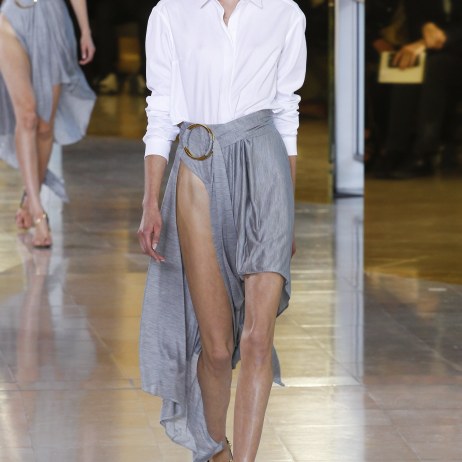 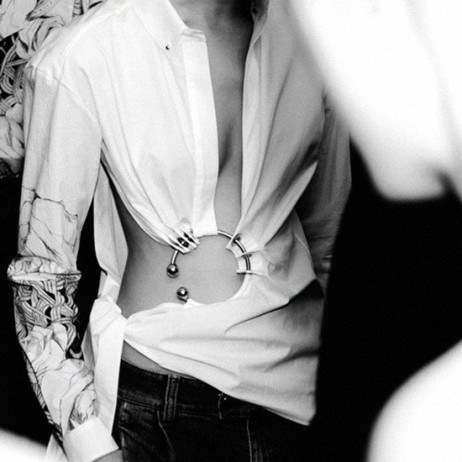 Slimane has been a very divisive figure in fashion since his return to YSL, staging a complete teardown of the brand and rebuilding it to something we hardly recognise, tailoring it to the young, hip set who look like they drink too much and party too hard. He revamped the stores, shot the ad campaigns himself, sometimes with him in it, and revived the couture house but only to a select few. He sounds like a douchebag right? Like the Kanye West of fashion. Slimane loved controversy, often feuding with editors and banning them from his show if they dared to criticise his collection, never speaking to press backstage. He loved the rich and famous as witnessed in his AW’16 show which was staged in California with several celebrities in attendance. One cannot get hipper than that. Still, regardless of the location the look remained cheap- leather jackets, denim cut offs, sheer little dresses, bomber jackets, it was a punch to the gut of high fashion high brow, readily accessible without all the snobbery to go with it. It seems Slimane tapped into the epicentre of the market and there was money to be made. He pitched smartly to an audience who had been at war with the commerciality of high fashion and relativity to the edgier consumer. Vaccerello might not want to depart from that formula too quickly, its a winning formula at any cost, Hedi Slimane made money, but his clothes were unremarkable, no imagination and blood ugly. He did not push himself to seek out something new, explore forms, play with shapes… no, there was never any imagination to his collections, they were sloppy, and lazy, and cheap.

Appointing a new Creative Director for a high fashion house is by no means cheap, one has to consider the cost of jettisoning the existing aesthetics and products, imbibing the vision of the new chief and in some cases location and relocation- it is a huge undertaking that can hurt a brand’s bottom line. In YSL’s case Slimane was based in California so Kering set up a studio out there, thousands of miles away from Paris, YSL’s headquarters. In stores the slate was also wiped clean too, products from Slimane’s predecessor was removed to make room for him, quickly getting consumers acclimated to the brand’s new era. Loyalty is not a word often associated with fashion, Creative Directors come and go quicker than we change our knickers, Simons left Dior before the ink on his contract was dry, Pilati out at Zegna in a little under three years, Wang out at boss way too soon, Alber’s shocking exit at Lanvin, and then there are brands that never change, stuck in their aesthetic, from season to season. In any case, the change at YSL is interesting, the departure of such a success story under what seems to be the somewhat unpleasant terms, if the streets speak truth, speaks more to Kering’s integrity I suppose.

One thing remains true in my opinion, Hedi Slimane might have made money for YSL, he did not do so as a great the designer, the designer he used to be. Here’s hoping Vaccarello will do the same, but as a better designer.

READ | Ìrìn Journal - The Lagos Issue. Lagos... there is nowhere in the world like it. I say this about a few places and it applies to them in moments but it applies always to Lagos. Gidi. Irin journal captures my home city in a way I’ve always wanted to see Lagos put out there: frenetic. Fast. Like really fast. Energetic. Loud. Louder. And a people just trying to get the hell on against all odd. And a personal favourite: Bank Olemoh designer rice!! Mainland!! Read more on the blog and add @theirinjournal to your roaster. You’ll only be richer for it. #Irin #Lagos #naija #read #magazine #culture #history #stories #gidi #saturday #weekendreading and why yes I have a gold coffee table. Of course I do! Ps: highlights in my stories...
Did not want to get up for this run today but glad I did and that is not to say I loved it. I didn’t. But it’s a new decade thing for me: showing up for me. Everyday we get to begin again. #notarunner #running #health #showup #beginagain #goodmorning #sussex
Go see: Three Sisters. Go read: The review- Chekhov’s play is moved to Biafra and the three sisters deal with struggles that plague their land. In a story of Love and loss. Hope and Pain. The chasm between cultures and what was all the fighting for. At the Lyttelton theatre in south bank until February 2020 #threesisters #lytteltontheatre #London #plays #stage #biafra #chekov #ellams
That last point: 💯 EXTREMELY. This is why I don’t drive. 😂 #pisces #starsigns #astrology #self
It’s 2020 bitch! I feel like that drunk aunt at a wedding. 🥴 Are we all in? How’s everyone doing? All good? No raging nonsense from the last decade? Ok let’s keep going. One breath. One step. At a time. We have 362 days to begin again because that is what everyday is: a chance to begin again. #NewYear #2020 #beginagain
My favourite movie. EVER!!! The Sound of Music. I had to call my mom to let her know it was playing on TV. Fun fact: it is also my mom’s favourite movie and every time we watch it together I am that child that says every word and sings every song! My mom would always have to leave the room for me because she had to resist the urge to sew my mouth shut! To get me to shut up!! I am tempted to go over and watch it with her just to sing along. LOL!! I’m the worst!! This scene is my favourite scene in the entire movie making history. The Llandlër is a love song and a love note of Captain Von Trapp and Maria. It is the moment I fell utterly in love with them. Yes I know the Baroness and what not but please free me! Maria did not steal her man. So I will hear no slander against my favourite non nun. If you’re in the UK it’s on BBC ONE South East. I’m sorry for my neighbours but not sorry. #happynewyear #soundofmusic #bbc