Lets get right to it because it was another day of safe to be fair I didn’t get to see much of the shows so here’s what I liked from what I saw.

Much of this season has been peppered by a sense of realness, a thing that says designers have emerged from trying to make women look like they should be back in high school again and making it more about the grown woman…if you know what I mean. Whether she’s a working girl or working mother, from daywear to glamourous evening wear, for the most part that was the starting point. Monique Lhuillier kept her collection real and feminine and beautiful. She doesn’t just design beautiful clothes she has a knack for lifting even the most basic of basics. Her signature is occasion wear, red carpet glamour and even though that didn’t really change with her SS14 collection, she infused an element of dailiness, a woman on the go but very well turned out. Winning looks included the red and white appliqué gown, the divine combination of a simple bandeau top with that voluminous floor length skirt, youthful fresh but grown up and as for the peach on coral combination with the exaggerated tail, you’d be hard pressed to find something with such simple sophistication. 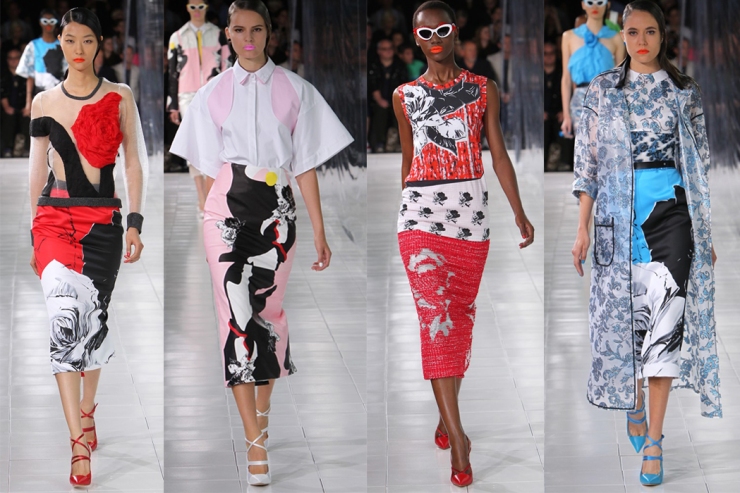 Looking back and projecting forward, this was as fashion forward as it got and Prabal Gurung shows why he is a firm favourite for fashion week. This was the futuristic 50s with a punch, Marilyn Monroe deconstructed and re-imagined. There was a strictness in his look, stark poplin all buttoned up and high neck, peptobismal colours, the rose detail. At times the print work was heavy and stopped a hair short of being a little vulgar, I wasn’t a fan of the PVC stuff either it felt a little bathroom curtain. Other times we were lost in the density of the narrative but when we were able to sort through the business the look was loud and brash but beautifully unapologetic and I’m a sucker for what he did with the tweeds. This collection was very much to the left but it takes a smart tailor to be able to make the customer look beyond the garment and understand the statement of style it comes with. And beyond all that noise was a collection that was superior in its craftsmanship and technicality. I think that’s what Gurung was aiming for. 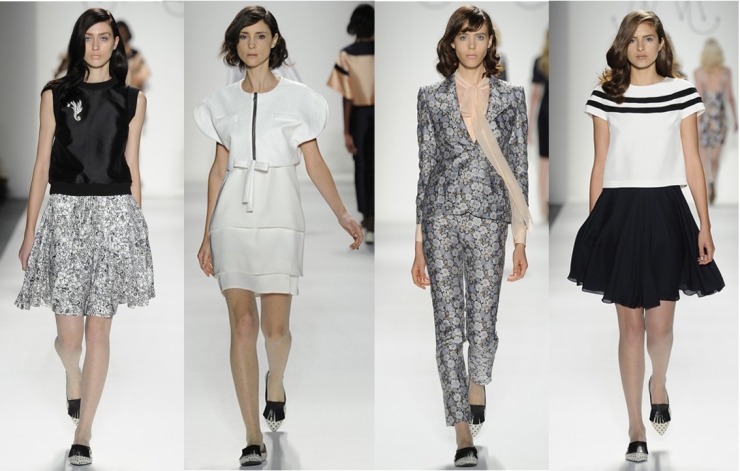 For SS14 the design duo made something light out of something dark and heavy. Taking inspiration from Francoise Sagan’s Bonjour Tristesse, the collection was a far throw from its subject’s melancholy. Neck scarves, prints, fringed flats, shifts…the only thing missing was the bicycle, baguette basket and beret. The little white belted, triple tiered dress in all its simplicity would be ideal for the Cannes photo call. Other looks were cropped pants, flouncy skirts, spring floral prints… there was a sweet appropriateness to the collection.