NYFW- Day 2; Utility, Femininity and Mayhem On the Grounds of the Versailles.

Day Two was weird, there was a lot of fashion, some noise and confusion. At times it was WTF and other times it took your breath away. Sometimes emotions ran high and other times, they just mellowed you out. It was a mix. 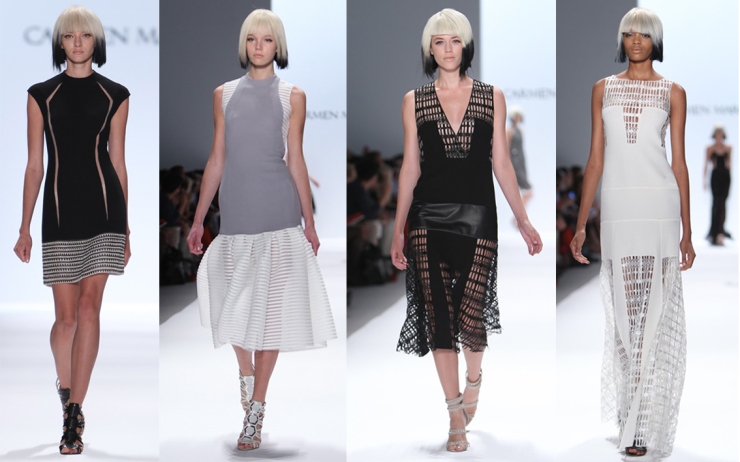 Carmen Marc Valvo is one designer that never ceases to turn out the tricks even when he stays true to his slick and sexy signature.  For a good few seasons now he has turned them out. SS14 is no different, if only fresher which is never a bad thing. Evening wear by way of the sporty, sheer with leather inserts, mesh, drop waists and monochrome wigs, which grew on me. It was all graphically pleasing that showed off his knack and appreciation for shape, fit and form. Because of the freshness, the sexy came of as an afterthought and that too was a good thing.

Something about this reminded me of Victoria Beckham SS12 and its bondage theme felt a little late to the party, two seasons too late, but now is as good a time as any for a replay because of the recent developments in the fifty shades camp…where was I? Yes bondage, straps, belts and harnesses, it wasn’t a big leap for a brand that has cornered the market on the sexy-sexy, but this felt a little more restrained, tipped by the sharp feminine curve they turned. The look here was sexy, as always, but this time they didn’t overdo it and to that end it was a stroke of brilliance; making bondage look palatable takes imagination and even if there was flesh on show, it was all done tastefully. It was good.

Without a doubt one of the best shows of Day 2. Now I get it, I get why FLOTUS feels Jason Wu the ways she does, he does a woman’s body good with his clothes. This was a more disciplined collection, more versatile and more relaxed. His woman isn’t playing up her power this time, she is showing off a softer side so silhouettes are loser and it flowed ever so well with such brilliant styling. The wide collared bomber style jacket with a sparkly cocktail dress felt and looked right, a new take on Games Keeper with the safari shorts suit, luxe utility dress as seen on Jourdan Dunn…I could go on. The finale of evening gowns literally took my breath away, particularly the lingerie style fish tale gown in black, its begging to be worn come award season. BEGGING.

I love a good bout of colour and prints, it breaks up all the pretty and inserts much needed edge and play into the mix and Nicole Miller’s show was just what was needed to wake things up on Day 2. Embellishment. Colour. Life! It was like the aftermath of a paintball fight in the Versailles Gardens, which was one of influences of Miller’s show. Distressed jeans, leather pants, curve hugging silhouettes, she went there, no holds barred with patterns on prints, embellishments on embellishment, riff baring and ripped jeans. The slick knee length skirts were both sexy and playful, strategically embroidered and laid back. Its not easy to make something so heavily embellished look effortless but Miller did. Geometric patterns enmeshed with florals, there wasn’t a boring piece up in this and together or apart this was a wardrobe ready collection.

Inspired by nature the designers turned out a safe collection, although a tad heavy on with the rosette detail, the finale gown looked ill fitting on the model and heavy so she couldn’t sell it on the runway. No matter, there were other more lovely pieces, midi body con rosette dress, simple dresses their signature silks, I adore the navy shorts and orange blouse, it had just the right amount of oomph with the nude shoes and simple high round neck. The styling was unambitious which made for a relatively uncomplicated collection but the risk in that was it felt too safe and predictable. The rosette embellishment served its purpose but rosettes are way past their sell by date in my opinion. Still, it was sweet and pretty.

Hydrangeas for the win on this blessed Sunday.
Good Friday despatch on a Sunday.
Good morning.
Cascais- Pastels.
Hold back the night.
“Never pick a fight with a woman over 40. They are full of rage and sick of everyone’s shit.” {this quote is attributed to Cate Blanchett} true words mate.
Loading Comments...
Comment
×