Okay. Breathe in. Breathe out. Fashion month is O-V-E-R. and boy oh boy what a bunch of malarkey and shenanigans amidst all the fashionables…

The thing about this new internet age is that EVERYBODY has an opinion. Its the law of human nature; we are all critics of something or other. The status quo of traditional media has been jettisoned and new traditions are replacing them but some traditionalists have been less than welcoming of this new world. I’m sure you know by now, I’m referring to that infamous piece by Suzy Menkes on “the circus of fashion” which in turn caused quite a circus in the blogging community, of which Suzy is not a fan. She wrote this piece giving her two cents and change and as you would expect, the internets got all a-tizzy with the rebuttals and responses from several corners. There are two sides to every argument; Suzy has a point, maybe several, even the rebutters concede to that. I think- and I am not in anyway in Suzy’s brain to know what she is thinking, but if I were, I’d say she is simply asking- Where do we draw the line? Who is for real? Who has something to bring to the table? I think that’s what she’s getting at. And you cannot blame her quest in this stance because there is so much noise out there WE CAN’T HEAR WHAT YOU’RE SAYING!!! In a way fashion week has become a circus, the goings on outside of the catwalk overrides what’s on the catwalk and we can forget that its all about the designers. Its their own 15 minutes and they are playing host not just to those present at the shows but to the world at large thanks to livestream. The stress, the sleepless nights and the behind the scenes dramatics that have kept them at their wits end has all come down to this and they deserve to be the peacocks. I want to believe that was essentially the bottom line of Suzy’s article.

But on the flip side, her generalisation isn’t fair; some bloggers singled out in her piece have come a long way and shouldn’t have been so unfairly characterised. Look, Ms Menkes, some of us are just trying to get something going here, no one wants to outpuff  your pompadour, you got that, but some of us are just trying to get on with getting on with our ambitions. I get where you’re coming from, but at the same time, think back to when you started out; didn’t you ever “peacock”? Didn’t you ever once hang out at the doors of a fashion show just so someone could let you in, recognise you and give you a shot? Didn’t you once, just once, send a letter to an editor, just so they could commission your piece? Didn’t you? If you didn’t, then keep on keeping on. But think about how it felt to get your first piece published, got invited to a show, were quoted in a reputable publication…well that’s just what some of us want too. So please, give a blogger a chance, you never know, she might just surprise you.

2. Hedi Slimane is he a hack or is he a genius? 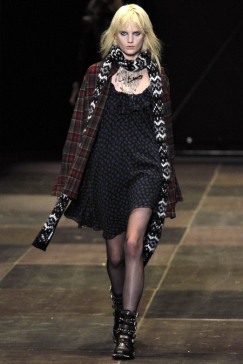 I pretty much died at the sight of LUMBERJACK!! on the runway? Lumberjack did not look good in its hey day and it certainly does not look good now. FYI GRUNGE IS NOT CUTE. I’d be hard pressed to call it fashionable but that’s just me. Sure Marc did it and it looked good way back when, it caused quite the commotion because we’d never seen anything like it and it became a footnote in fashion history and blah, blah, blah…but if you’re going to emulate that at least up the ante. Not only was this collection tacky, it was sloppy and ugly and just gross. And goddamnit it was FUGLY. It made Primark look like high fashion at best, and Primark would have done a better job of it, of that I’m sure. There was a reference point; Grunge, but that was all there was to it. There was no attempt to rejuvenate the look, no effort to feminise it or to make it synonymous with the brand’s core customer; Umm Hedi, women don’t want to wear tacky baby doll dresses and lumberjack shirts. And they sure as hell won’t pay an arm and a leg for tattered denim mini skirts…DIY. It reminded me of those emo art clubbing girls who pop pills at the rave, go buckwild on the dance-floor with glow sticks, hop on the night bus home and get off at the Kebab shop… you know those girls; they are also the ones that wear ripped tights and smudged eye make-up. And this may be this is his target customer, but she doesn’t have the Saint Laurent money.

We get it Hedi, you’re a rebel and you’re going against the grain but you don’t have to try this hard to shock AND shocking does not have to be ugly and gauche.

Off with his head!

It would appear Hugh Hefner was a muse for this round of shows. And designers would like us all in sleepwear day and night. Why get out of bed? Negligeé with large over coats, flannel pants and heels, smokey eyes and boudoir vibe…Its all kinds of sexy and cute. But I hope this is not the start of the lazy dressing. There’s a fine line ladies, find it and work it.

4.And the winner is…

Milan and Paris were a bit of a ho-hum this season. Only a handful of shows really hit the mark the rest were okay. New York was the clear winner in this round of the fashion olympics. Not because designers were being revolutionary, there wasn’t really any of that, but they turned out more astute collections. There was less of a show and more of fashion and style. Sometimes it felt like they played it safe but you know, safe is not so bad because at the end of the day; fashion is a business and if safety sells clothes then so be it. Leave the theatrics for another day I say or as the case may be, to the “peacocks”. Even the diffusion labels were creating more than enough interest to get buyers spending their money. And more importantly, customers buying once again.

London came a close second and for once the eccentricities were left to one side and the collections reflected a more serious side to the capital’s fashion collective. It wasn’t boring, but there was diversity, where it was quirky it was the stylish kind and where it was safe, it was commercially savvy, still with an element of that London quintessence There were some wonderful surprises; Matthew Williamson was most surprising of all and it was great to see the return of Jasper Conran to form after a tepid summer collection. Sometimes its cool to be uncool. Christopher Kane was the talk of the town and he did not disappoint with his army of camouflage, fur and luxury. London still maintained its creativity, but then there were others like Ashish who had us wondering; Seriously? Workmen’s glowing orange waistcoats? That’s a thing? I hope not. But what’s London without the extreme eccentrics.

Luxury resides in Paris, it always will so kudos to the high fashion houses a la Louis Vuitton, Chanel and especially Hermes for showing us just how its done. It was all very expected and all well executed.

And as for Milan, after Mrs Prada’s stunning show, it was hard to think of much else but Mr Armani gave us a new preposition once again showing his flair for the imaginative and eye for shapes. Cavalli was another stellar show with an unpredictably well put collection. As for Versace…mommy always said if you don’t have something nice to say…oh what the hell, It was ghastly with its PVC hooker looks. Seriously Donatella; spiked chokers? Sometimes one has to wonder who exactly these designers envision wearing their merchandise.

There was a lot to see and to take in. Trends to decipher and sort through but for the most part, the flavour was laid back; BEANIES!! Bad hair days no more. Beanies with everything, from formal to casual, day to night. Looks like we’ve found the definition to Smart-Casual. But as much as the beanies on the runways were loved by most, there was plenty that raised brows; Volume. There’s a time and a place for volume, not to mention a particular body type for it. The average woman is not the model walking down the runway, she couldn’t be further from that and she wants shape, fit, form and flattery when it comes to fashion. The only people who look good in boxy silhouettes are the models on the runway, this is not a forgiving silhouette, its limiting. It’ll be a hard sell come Autumn.

And then there was Tie-dye and peplum, besides the lumberjack brouhaha Hedi served up, these two round up the worst top three trends. Please make it stop.

She had to have her own runway show; enter Superstorm Nemo. Thanks for ruining one of my favourite Disney movies Mother Nature. Nemo came and caused a ruckus for the fashion front row faithful; snow boots. Yes. Who knew such shoes resided in the wardrobes of some of the most fashionable? On the flip side, Nemo showed the impractical side of fashion with the high heel die-hards refusing to forego height even while slipping on ice. File this under lessons learned in practicality. But you’ve gotta hand it to fashion, it was business as usual.

And SCENE. Until next season…