The Dior exhibition in Paris is quite possibly THE most beautiful thing there will ever be in fashion. The most beautiful representation of history that I have ever seen, bar none.

My sister and I booked plane tickets to Paris way back in the summer to see the exhibition in the winter because Paris in the summer time is not my flute of champagne, it is much too much. And the preferred way to go to Paris for me is to fly from Gatwick and be there in no more than 45 minutes and it takes no less than 30 minutes to get the Île de la Cité from de Gaulle. Traipsing all the way to Kings Cross to deal with the hoards of people getting on the express is really not appealing to me. But, with the flight tickets booked someone forgot to book the exhibition tickets… my bad! I ended up queuing for three hours to get into the museum to see the exhibition but I’ll tell you what? It was worth every single second of those three hours, standing in the freezing cold, absolutely freezing, but surrounded by the beauty of Paris. I’m afraid I have been rather hard on Paris over the years, because this time she was absolutely delightful. Perhaps it was because I was surrounded from all that Dior loveliness, but she looked positively radiant despite the chill. 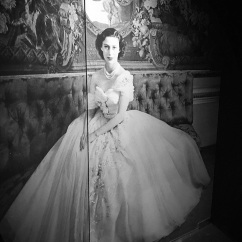 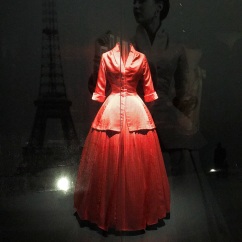 Once we got into the Musée des Arts Décoratifs on the edge of the jardin des Tuileries, engulfed by the warmth, it was time to explore what could possibly be, hopefully, the most divine piece of fashion history. Past his personal memorabilia, letters exchanged between a father and his son, we learn about his sister Catherine who was part of the French resistance in WWII, was kidnapped and rescued from the concentration camps. In the Dior years we are treated to a history of his life, saddened at his death and inspired by his legacy. Christian Dior was an extremely special designer, rare in his genius and a talent that we often take for granted, not in his day thankfully, but in this day. You see, exhibitions like these excite me for the mere fact that they are a history lesson that takes us back into the designer’s minds’ eye, what was in their heads at the time and how they captured the era and transformed the thinking of the day. How they moved fashion along from whatever trend it was in, and how they made their legacies. The vision of Dior is without question, magnificent. He envisioned clothes in a way particular to the mood but there was a sense of resurgence and an introduction into the unknown. A departure from the tradition. Christian Dior set a tone from his first sketch to his last garment. He wanted clothes to represent something more than just items to be worn and discarded at the end of the day, every piece of clothing had to mean something, had to be extraordinary. A jacket was not just a jacket for Mr Dior, it changed an entire moment and altered the course of fashion history. Today, even with the designers who have been and gone at the helm of his house, we see his signature, his vision, that special something he had, because in fashion everything is a reference to the past, there is almost a celestial fear to stray from the past. 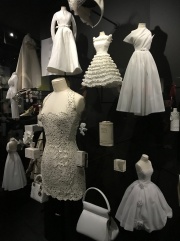 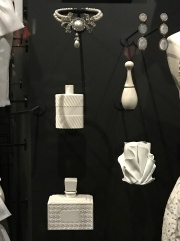 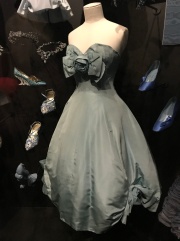 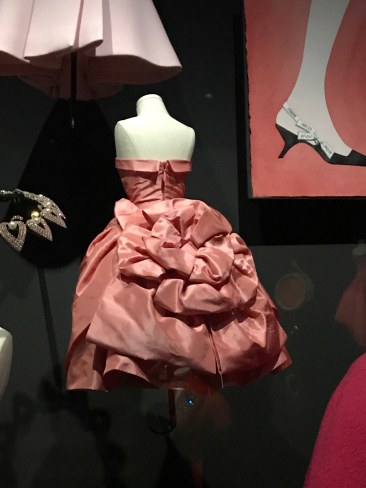 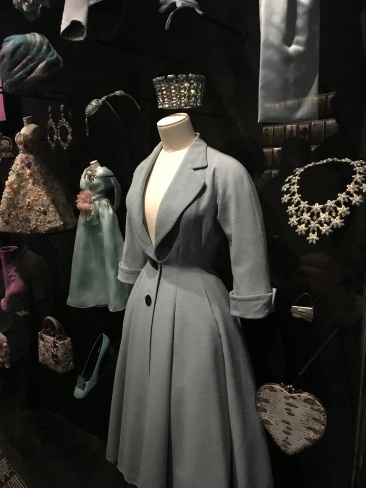 Works from the master himself was filled with an elegant opulence, ball gowns, full skirts, bows and intricate details in the most romantic way. Couture is such a fine art, a delicate interpretation and nothing has absolutely captured the true essence like Christian Dior did. He was truly a dream dress maker.

But you wouldn’t know it from the very first garment from the exhibit as you walk in from the west side. A waisted dress, simple and beautiful, that would fit into any runway today, a style which has been interpreted too many times. It sparks of a sexy femininity in the most subtle of looks. You step into the museum, into a world of the most dreamiest clothes in the history of fashion, displayed along a dramatically dark setting, some behind perspex glass, memorabilia, miniatures, fine jewellery, shoes and an incredible show all round. With his looks Dior sparked the renaissance of Paris post WWII, cementing its reputation as a fashion capital with a particular essence. It unfolds trailing Dior over the years along with his several inspirations pictures, sculptures, works of art from friends like Dali, interior decorations etc. 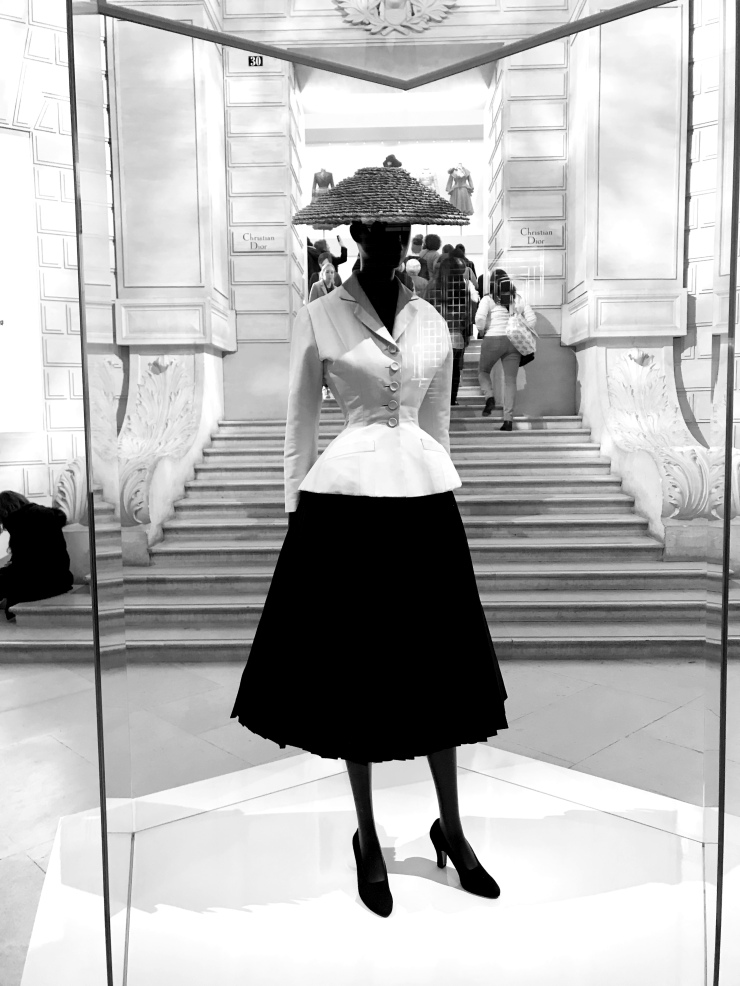 On the East side is the new look Dior with the bar jacket, pleated skirt and sedge hat you know that most iconic look. And behind that is a world that unfolds into more of the former in feeling but a difference in look and mood. We walk into a section that hosts other designers who have been inspired by Christian Dior, paying homage to the master as seen below. 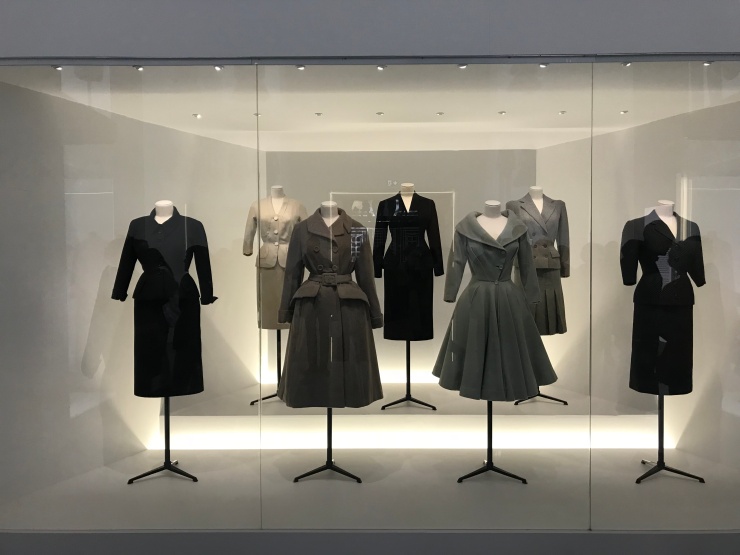 After Mr Dior’s death Yves Saint Lauren is appointed as head designer, according to the designer’s wishes. 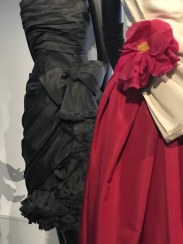 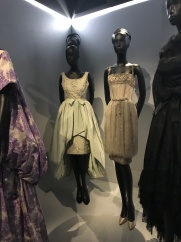 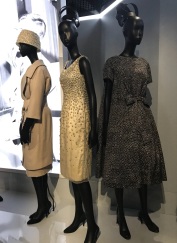 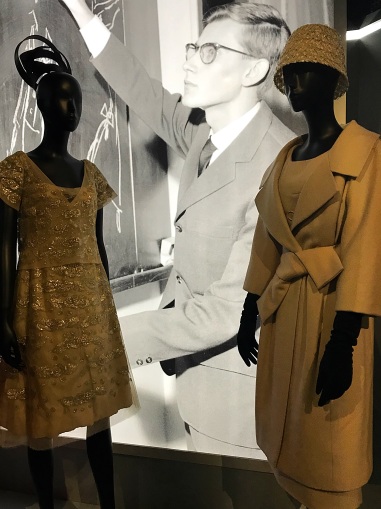 Fashion has a soft spot for YSL, as I would imagine Christian Dior. Saint Laurent introduced the Dior woman to a newer more delectable look. It was eternally Parisienne, sophisticated and elegant. He made a mark, filled big shoes and carried on the dream. The theme of Christian Dior was to make life less complicated through fashion, interpret it with art but make it refined and fit into a chaotic world without further increasing the noise. YSL did that with his ebullient designs that showcased a talent for detail, smooth lines and embellishment. 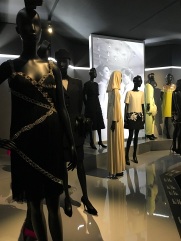 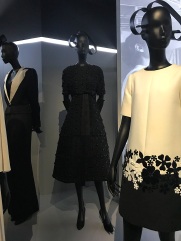 After Saint Laurent’s departure from Dior, having been called up for military service, Bohan, who worked under YSL was appointed head designer for the house. And although his name did not carry as much weight as his predecessor or even Ferre after him, his collections were a palette cleanser with an unusual spectrum of inspiration. The richness continued but his styles, often simple to the eye, deserved and often attracted second and third looks because of an up-serve of glamour, jewelled gowns, beading, mini A-line dresses with stunning detailing etc. There wasn’t a lot of quibble about his clothes. 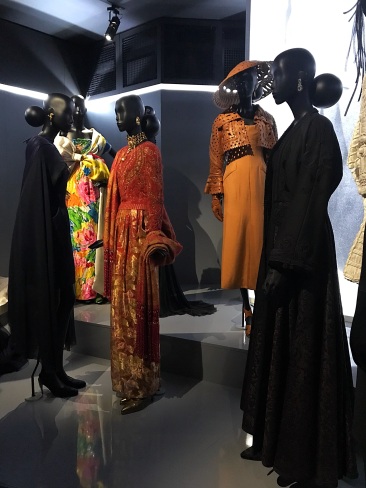 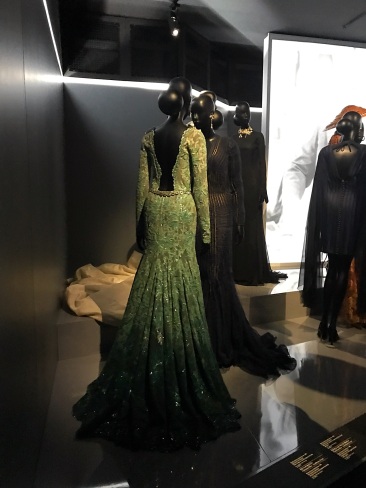 Another big name another superb tenure. Gianfranco Ferre is a brand known for its relaxed approach to fashion and glamour which often meant an ease in sophistication, less of the trend led pieces and more of the bones of a wardrobe, so to speak. Yet his collections, whilst at Dior were glamorous, and packed with a punch. He found a way to blur the lines between his own easy approach to Dior’s intricate and passionate signature. Big and bold, colourful, bows, big hats, a manipulation of colour and fabric and a dazzling evening wear couture collection. That perforated cropped leather jacket with an sedge hat stand out as so, so Ferre but fits in with the Dior narrative. 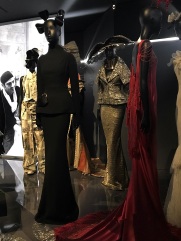 We come to an era of high drama from beginning to end. The appointment of Galliano to Dior caused quite a stir within the fashion world because he is a card carrying member of Les enfant terrible posse known for their wild and wacky fashion than anything else and even more dramatic ways out of the fashion spotlight. But Galliano took his critics by surprise whilst still maintaining his signature wild ways he managed to pull off some of the most acclaimed couture collections whilst at Dior. Personally, I often found his clothes and collection too garish and over the top which often tends to result in a gimmicky mash up of extras, but to those whom he appealed, he did.

Until this day Raf Simons remains the most talented designer to have taken over the reins at Dior, that’s my opinion and I am not fighting anyone or debating about this. Mr Simons has an acute mind, an eternally romantic vision of how fashion should be. His gowns took fashion above and beyond the realm of needle and thread, his collections were akin to fairy tales with happy endings. Simplicity and cleaness that defied thought and expectation. His short tenure at Dior produced the most extraordinary pieces in the history of the house and fashion. I was saddened to see him leave and being in his Dior garden I shed a tear. 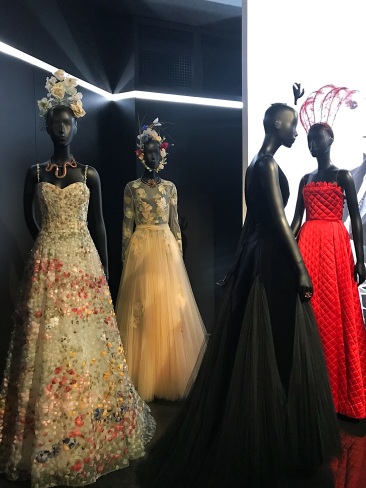 Today Dior has at its helm the first ever female creative director, this has been a long time coming. I loved Chiuri’s work at Valentino but have less of that for her work at Dior for the simple fact that its all seen and done before. Looking at Valentino and now Dior under her tenure, the look remain the same, too similar in silhouette, style and form. Pretty yes, but that’s about it. 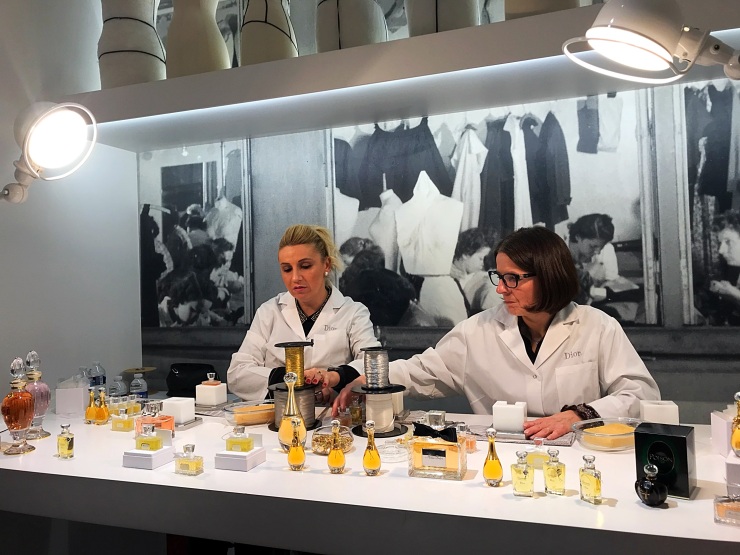 Following the years we moved on to the prototypes of different gowns stacked high and cut in all white in what felt like a clinical rooms and to the right of that room, depending on your direction was a workshop of the sort where we were treated to two of the Dior ateliers who showed us how Dior perfume bottled are designed and packaged.

If you thought this was the end, think again, because after the mini bottling session, we were in for the most spectacular treat. The Dior Ball. A finale of some of the most iconic and beautiful gowns from the house. Glittering, big skirted, slinky and ultimately the most beautiful pieces of history you will ever see all gathered in one place. 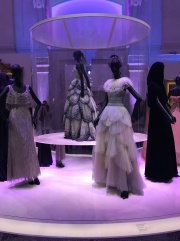 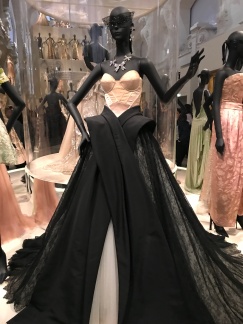 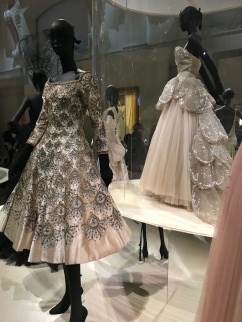 This was probably my favourite part of this exhibition followed closely by the Ball. Or maybe they tie I don’t know, its hard to choose because everything about this is do beautiful but the garden is magical. The Garden was a recreation of the Raf Simons first show at Dior, with the hanging flowers (these were laser cut from paper but the same effect no less) The garden was simply magnificent, if you feel as if I am using too many superlatives here, I am, but there aren’t any words to do this justice except for you to go and see it yourself. It is an absolutely magical and the garden was in one word, sublime. 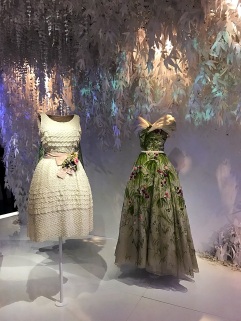 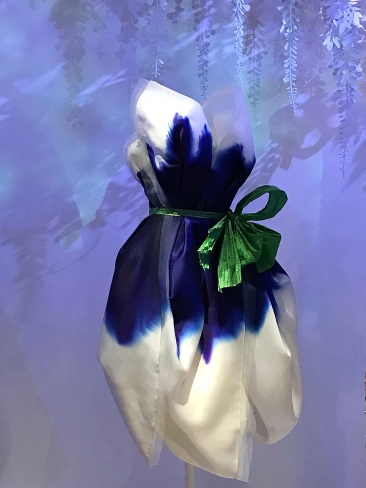 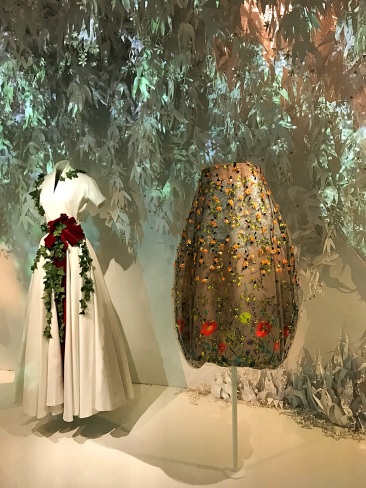 If you can go to Paris to see this before the 7th of January please go, this is a divine day out in a pretty city, stand in queue for three hours and you will not regret it, My only regret is that I waited so bloody long to see it. Fashion designers are purveyors of culture and some of the best history teachers, through their clothes they tell stories of time gone by, of the presents and can project the future. Their minds are filled with unthinkably fantastic ideas that have the power to transcend one generation to the next. This was not merely a show and tell of beautiful clothes, this exhibition is the story of a man, a love story through the ages, about the life he lived and loved. This is a love story in all its entirety and you should get yourself to Paris if you can and go see it before it leaves for another thirty years. Or you could just come back here.