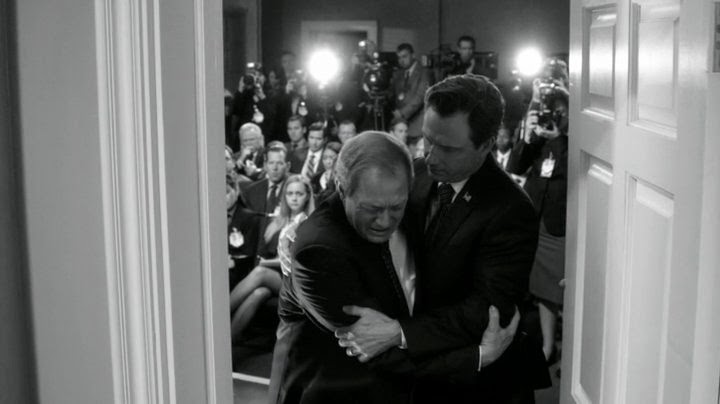 Soooo James got the bullet. He ran and Jake took him out Command style. Cyrus is a mess over it, finally the beast gives way to the heart and it was so disheartening to see him break down. David is running scared and Olivia is in cahoots to take down B6-13 once and for all because she is the hand of God… Maybe not in that sense but Papa made her see the light. Mama Pope is not messing around and playing childish games with Adnan Salif who now realises that she may be in over her head. Mellie is getting some and very much deserved too, so let the dysfunction begin.

James died. I see the rationale for killing his character off, he was one of those that had the Quinn effect; the ability to be really annoying, despite his Publius play. By the way I’m still struggling to understand where this whole vendetta against Cy came from. I mean, did you see that coming because I didn’t. What led to this place, besides the other times that Cyrus has used James for his own gain and James has just laid down to take it and enjoyed the perks of being the other half of Cyrus… so I am still a little lost as to where this vindictive James came from. But he’s gone now and I will miss him, the best parts of him not the whiny parts though.

I am still of the opinion that Quinn too should have gotten a bullet in the head. Her storyline is a mess and she is disgusting. Like EW! So gross and weird. I was properly weirded out by that scene between herself and Huck in her apartment. It does not make sense, does not fit into anywhere. What’s the angle there and most important, how did we get there? And why are we here? Is she to become some savour to Huck from Charlie or what? I don’t see the point in giving Quinn more than what she has now because doing so would indicate that her storyline will only get more tedious. There once was a time when HuckleberryQuinn would’ve rocked my boat but that expired somewhere after Seven Fifty-Two. She needs to be dead. That is all there is to say about this.

Yes she is a terrible person but Mellie deserves to get some so I am not mad at this dimension between her and Andrew Nichols. At all. Fitz gets to play with Liv, Mellie should get to do the same. Even better Andrew likes her, always has.

Mama Pope is taking no prisoners in this deal with Adnan Salif. We are still not clear on what the game plan is except it involves taking down the White House and those associated with it. Olivia included.

But back to James, David lives and as the episode unfolds its easy to see why although this might be a risky choice that will cost him his life eventually- taking down B6-13 with the help of Olivia… that’s a tall order and David is too much in love with the law to get his hand dirty or do anything underhand that will see the crumbling of the dark empire that really runs the republic. Right now, Olivia is pissed because Jake is the reason why James is dead, she actually thought he would be different. Jake believes he is different enough from Papa Pope because some poor sap didn’t have to kill James, he did and for that Jake thinks he is the more moral of the two but being Command has nothing to do with morals but ability to see the job done without getting your hands dirty. DUH. But he managed to piss Olivia off and so she has realised her calling is to bring the Republic to the light. Hence her vow to take down B6-13 with the help “the law” also known as David Rosen. I for one am eager to see how this unfolds and who gets canned in the process.

And now Cyrus… oh man I was in tears. Weren’t you? He went through the stages of grief, refusing to be weighed down by it and going on business as usual but all the while we can see the emotional build up leading to the break down. Its through Cyrus’ meddling that James is dead, there were times he was less than a honourable to James, his ambition and the republic got in the way of his relationship, often times it felt like his relationship was a pun waiting to be tossed up for the perfect move. But one thing remains, he did love his husband, if anything we saw that from the episode last week. James is his weakness for all his bravado and to lose him in such a way is something he may not forgive himself for. I especially loved the backstory of their relationship it gives an endearing light to Cyrus but more than anything we get a sense of the deep feelings they shared despite their spate of manipulations. Scandal is such a show that employs some overly dramatic theatrics sometimes so that Cyrus was able to express such raw emotion without any kind of extreme machination is major props to all involved.