Can you tell? I am so wound up I couldn’t be more twisted than I am and right now we are in crazy town twisted in my head when it comes to Scandal!! I cannot handle this side to Olivia Pope, this desperately waiting for her married lover side. This is BAD! So bad that she has sunken to levels of sitting by the phone waiting  for said married lover to call. I mean she throws the phone in the bin to prove a point to Jake only to dig it out to discount her point to herself. I HATE THIS!! And then as if its that not the worst of it, SHE GOES WITH JAKE TO THE WHITE HOUSE DINNER ONLY SO SHE COULD SEE FITZ!! COME ON OLIVIA!! WHAT IS THIS!!

Okay. Breathe in…let’s take it from the top.

Liv and Papa dearest are having their routine Sunday dinner and this looks like a scene out of hell freezing over, because nothing could be more frigid than this father daughter duo. There is a showdown of words between them where Liv lays it on the line that she is only there to fulfil her part of the contract and nothing more because if she doesn’t he makes her friends do things, Papa just says, if your friends leave me alone I leave them alone, capice. But then there is the mention of Liz’s mother, its one person who is absent but has carried so much weight in this season it leaves us desperate to know just what the hell happened to Mrs Pope? And what does Papa know?

Well that’s where Jake and Hawk come in, they are playing their own command to take down Command and its all very Spies like us…if that’s the correct analogy for this. But I am looking forward to how this will go down and more importantly, what they unearth about Mrs Pope…is she dead or alive?

Second favourite line of the night; “I don’t do losers” Mellie and Cyrus are struggling to find a campaign manager for Fitz’s campaign because their guy is tainted. Leo Bergen tells them a few home truths; Fitz is weak, he looks weak and unhappy. He doesn’t screw his wife so he looks pinched, he can’t keep it in his pants so he looks like a Clinton-esque time-bomb. Bergen is not buying their grand show not even a desperate invitation to the Oval office can sway him to commit to their cause- Fix Fitz, win the Election. Even they know they will struggle to do this without Olivia Pope. He paints Mellie as the shrew she is and acknowledges that the problem is indeed in the optics- Fitz looks weak and the American people don’t like weakness in their President. That was a pow scene even if for the look on Mellie’s face as Leo hits her with home truths. I love drama like this on scandal, outside of the Fitz Liv BS its things like this I live for when it comes to this show.

Liv is sitting in an interview with Josephine Marcus who is a candidate in the elections too. Josephine needs the Pope treatment, easily one of my favourite scene of the night that did not involve Liv looking through a trash can but showed her going to war with Fitz and Cyrus. She tells Josephine what her problem is, she’s unseasoned and needs to lose all those ridiculous clichés attributed to female politicians, quick time. On the spot Josephine hires Liv and in confidence relays her BIG SECRET; that daughter she gave up eons ago. Olivia Pope to the rescue…Let the games begin.

Quinn is grounded and the team is freezing her out. Finally. I’m getting increasingly bored with Quinn Perkins, I’m not sure if she has a place in the show anymore or what her angle is here but she is increasingly becoming redundant and it looks like they are grasping with straws of just what to do with her character…so she buys a gun. okay. Quinn needs a reboot of some sort. Whether she uses that gun to kill someone and actually becomes a client of Olivia Pope and Associates…hm. No we’ve been there and done that with her, but she needs something.

We pick up from where we left Ftiz and Command aka Papa Pope in the last episode, in his office for a showdown of the sort. Fitz is naive in thinking he can pull rank over Command but Papa soon lets him know that no such thing will happen. Fitz finds out that Jake is looking into the Remington files and summons him to a basket ball game showdown of lovers…if we can call it that but there they are pumping their chests and dunking balls trying to outdo each other. I guess Fitz is pissed that Jake ended up doing more than watching Olivia Pope. Talk about abuse of Presidential power, wasting man hours to pick up your competition; your mistress’s sometime lover. Not that we are saying you’re married or anything Mr President, but you know, you are. She is single, He is single. Neither owe you any obligations… #JustSaying.

And then the nerve of him to step to Papa Pope, demanding he let Jake be…”No Mr President, it is you who should not test me.” I love love LOVE this power play between Fitz and Papa Pope he is not here for his foolishness and will not be told what to do by anyone, not even the President of the United States, when it comes down to the power plays, Papa Pope is actually the god and Fitz the disciple.

Fitz is a child. He throws tantrums and expects people to pick up after him. GODAMMNIT he is impossible especially with that B613 gaffe in the oval office. He doesn’t seem to care that he could lose the election all he cares about is a life that could be a phantom, a life he so desperately wants it could make him lose everything and still, he’ll never get it.

Best line of the night- “We got Poped”. This is what happens when Cyrus plays into Olivia’s hands when he divulges plans to waylay Josephine Marcus’s campaign. Cyrus does not know what Liv’s connection to Marcus and he is not happy with Olivia Pope, the gift that keeps on giving. not happy at all and unhappy Cyrus is not good. Oh and there’s a Harry Potter reference there too. “I gave her a world class education in the dark arts” Nice.

Oliva is feeling very much on the outside of Fitz’s life, they’ve had barely any contact together this season. She is concerned he is forgetting about her. This is needy Olivia that I do not like. Its all so high school, I don’t need a man, when she tosses that phone into the garbage in some show of chutzpah to Jake, he is not buying into her act but humours her all the same. Maybe because he knows where hear heart really is and its not where his is, with her.

The Pope team keep digging in Red Springs only to find out that Candy, Josephine’s assistant and sister is really Josephine’s daughter, we saw that coming, a bit of a cliche too, but Liv wants Josephine to face this head on when she would rather not. She is not about to play political games with her family as puns…too bad lady, you already open that can of worms.

BOOM goes the first bomb of the election when Governor Reston calls Josephine Marcus out on her secret, Marcus having no choice, takes the Olivia Pope route and comes clean. Its the classic Pope touch and in so doing wins the hearts of the nation…but then she fires Olivia. I’m telling you my girl is not having a good time of it season three she is completely broken and vulnerable. And nothing proves this like the scene where she is on the phone with Fitz, when she dug the phone from the trash to answer his call, she even admits to it. This is as vulnerable as we’ve seen Olivia and whilst its just sheer brilliance of the writers to give us such an insight into her when she is down in the dumps I don’t like it, I don’t like her weakness but what they have shown is that she is human and this here lies their true brilliance. 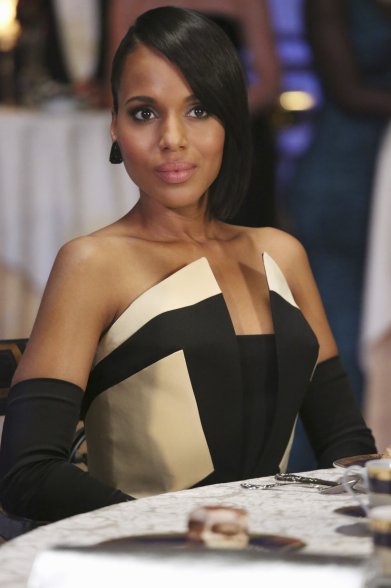 Mellie is one character who has shone all season long, the long suffering wife of the politician who is in love with another woman. She does things for the greater good, she’s a team player but a power hungry first lady because the bigger picture is her political future, not anyone else’s, and Fitz is the ticket to that. She will do anything to get him back into the White House and if that means allowing his mistress back into her marital bed whilst she watches them do it even, then so be it. Her scene with Olivia at the Correspondence dinner was powerful and shocking and unbelievably fantastic.

Side Note; Liv’s sashay to the meeting with who she supposed is Fitz was just BANANAS!! Left, Right, Side to Side. Strut. Strut. Strut. Then BOOM. Out comes Mellie…buzzkill!! No nookie for Liv tonight. Lol!

After Liv has been dumped by Jake, who will not play second fiddle even to the President, Josephine Marcus springs up and suddenly wants to win this thing, and of course needs Liv on her team…I am on board because this is how Liv gets her groove back.

Side note; Harrison is not happy with Liv right for throwing the money and Marcus away. Remember when Liv said she needed to be their gladiator at the end of season two, well she is not being one right now.

Now that we know who shot down the plane carrying Olivia’s mother here’s what I want to happen; I want Liv to take on Josephine Marcus and win the election. I want her to sever all ties with Fitz and I want her to take him to task. I want her to get with Jake and I want her to give her father a Pope read that he’s due. I want Olivia Pope to return to being OLIVIA POPE. With the White hat tilted to the side. It is not too much to ask is it?