Mrs Patmore is not doing so well in the modern world; ELECTRICITY?!! BUT WHY?!! I swear you thought it was going to get her head or something.

Lady Grantham has a new maid, Baxter, who knows that Americans like Orange juice at breakfast which makes her a godsend in Cora’a book for bring back memories of days past. She comes with a sewing machine that uses electricity which does not sit well with Mrs Patmore…because you know it might just runaway with its head and take over her kitchen. Its quite something to witness these eccentricities and reaction to the modern world and things we take for granted, kudos to Julian Fellowes for incorporating this so well into the script. However, not all is as it seems, Thomas has his own use for Baxter, now that O’Brien has up and jumped ship to india, he needs eyes and ears about the place and Baxter is to be it. What he has over her, we don’t know but its something definitely, so whilst she’ll be liked and trusted, she’ll feedback to him and he’ll make whatever move he has to make.

Its all very Thomas isn’t though.

Mrs Patmore want to remain stuck in the dark ages, and if she has her ways, the house will still run on candle light not electricity and ice boxes instead of refrigerators oh but she would like to be rid of her corset. 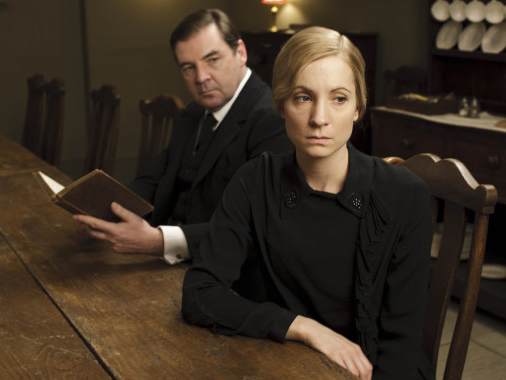 Finally the truth is out or some part of it and Mr Bates knows what happened to Anna, just not who, although he has his suspicions. He threatens to quit and leave Anna unless Mrs Hughes tells him what has caused his wife to go off him in such a way, in the space of a day. Poor Mrs Hughes has to swear on her dead mother…mind she doesn’t return as a ghost!! I have to say I don’t blame him because he was losing his mind as Anna wouldn’t tell him and now we know she is not with child which is a relief but seeing her suffer in such a way was just heartbreaking. One thing that did strike the audience was how she saw herself, how she blamed herself for something that wasn’t her fault and how she thought she was not good enough for her husband anymore. Its sad to see the this attitude, although in a movie, is the same attitude that is still carried on in today’s society, many rape victims blame themselves for what happened and it doesn’t help that we have moronic politicians around the world, chauvinistic pigs who blame the rape victims instead of the perpetrators. I would’ve liked to see the police involved and how they would’ve dealt with it and I hope Mr Green gets his comeuppance, this is not a part of the story that should lay untouched.

Bate has plans of his own and I bet it has to do with his fist and Mr Green. In resolution he and Anna move back in together and agree on no more secrets which of course means there’s more to hide. 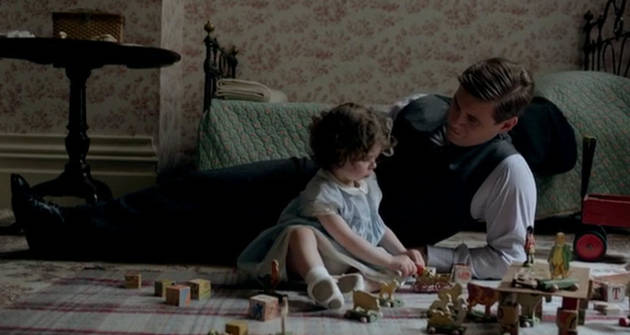 Branson, after all this time, feels lost because he neither fits in at Downton nor at home back in Ireland so his grand plan; to move to America, the new world with baby Sybie and start afresh there. I’m rather over this storyline with Branson, yes he was a chauffeur turned husband to a high born woman, and yes he was out of place and had his political ideas and blah, blah, blah but I would much rather he made a go at this life with his daughter, with the obvious support of the family as opposed to wondering what might have been if he stayed in Ireland and what will be if he stays here…this is his place now, he has an obligation to his child and it would be wrong of him to tear her apart from the family that have come to love her so. I’m bored with him. Although I do like him but enough now, get on with it.

Lady Mary is fitting into her role as Land owner and Lady of Dowton quite well, therefore she’s dallying in things a little less scandalous and a lot more boring, but hey ho hum. We do however see the return of one Evelyn Napier who now works with the government on land business etc.  There’s a reason for his return obviously and we’ll find out in no time. I do prefer Lord Gillingham.

Lady Edith’s lover has up and gone and not said word of his return…dum dum dum…he is obviously up to no good in Germany, if indeed he is in Germany or if he even has a wife to be divorced. Poor Edith, ever so stupid all in the name of love. She got jilted at the altar by someone old enough to be her father and now her lover has pulled a runaway bride but the groom version. Oh well we’ll have to wait to see what he’s gone and done this time. Love, I tell you sometimes it doesn’t help matter. And now we see her visiting a doctor, obviously she’s knocked up or something along those lines…Oh dear, it doesn’t bode well for poor Edith.

Molesley, Molesley, Molesley, beggars cannot be choosers mate. That’s a lesson learned this week when he decided to keep Mr Carson waiting when offered Alfred’s job because Alfred had gone off to the Ritz to audition for some chef or other. I rather thought we were short of him because that whole footman’s drama is also played out between himself and James especially over Ivy whilst Daisy pines away for Alfred, Oi vey. But as luck would have it, Alfred did not get the position so Molesley who needed time to think about Mr Carson’s offer is now out of luck… it was a good lol moment.

There’s some sort of gardening drama and the Dowager and Mrs Crawley are at each other’s necks about it. I love seeing these two together because they remind me of exactly how old ladies get all flustered over nothing really, then again the Dowager does take pride in her gardening. She hires someone of Mrs Crawley’s recommendation only if it’ll get her off her back but her pen knife’s gone missing and only the gardener was in the room at the time…who done it?

Over all not a bad episode we were back to the whole upstairs affairs-downstairs drama and it continued in good pace, obviously this season has struggled a bit because of the glaring absence of two of its most pivotal characters but something is afoot and if there is anything Mr Fellowes knows its how to drag out a plot line and gives us a swift kick in the nuts wither either good or bad news. I’m not losing hope yet.

Hold back the night.
“Never pick a fight with a woman over 40. They are full of rage and sick of everyone’s shit.” {this quote is attributed to Cate Blanchett} true words mate.
On Sundays we paint murals.
Sunday. Stepping out in gold kicks.
Dusk to Dawn.
Moments at home.
Loading Comments...
Comment
×