Madam Reads: Tryin’ to Sleep in the Bed You Made by Deberry Grant. 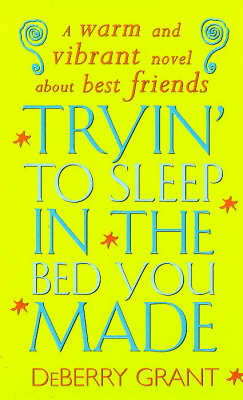 A tale of friendship from two friends, I’ve always been fascinated by how this duo write their books. Trying to Sleep is the first book I read from Deberry Grant and I’ve read it several times afterwards and committed it to memory almost. Its a yearly read and a very fine one at that.

Gayle and Pat have been the best of friends since childhood, they are so close they could be sisters; they become adoptive sisters because Pat is adopted by Gayle’s parents. From a young age they harboured grand dreams; Gayle is the pretty one who believes her fate lies in the hands of Prince Charming and Pat is the one with the smarts who believes her career is the only way to her dreams of a better life than what she has known. And there is Marcus the man in the middle who has history with two best friends. That night binds them together and Marcus blames himself for it.

Gayle and Pat both get what they want; Gayle marries Ramsey, her knight in shining armour it would seem at first, he provides her with the life she always dreamt of; the big house, fabulous lifestyle, money to burn, add an adorable little girl, they are pretty much the picture perfect family. Gayle lives for playing house until her house starts to crumble at the heart of its foundation; Ramsey. Pat gets the career and moves on to greener pastures, but as she climbs up the ladder to success she has to consider if the the grass really greener on the other side without the love of family and friends. Marcus has to let go of his past and learn to forgive himself. As far as they run they cannot outrun their secrets and in the matter of love, the heart always gets what it wants and leads you right back to where you are meant to be.

This is a story of freindship standing the test of time, through the good, the bad and the murky grounds. I love the seamless flow and the harsh realities faced by each character. The reader is immediately invested in this story and we have to pick sides because it feels like Pat and Gayle are our best friends; we feel their pain and share their joy. Pat is a hard nut to crack; her fear of rejection is her Achilles heels and at times she is a hard one to sympathise with. Gayle is easier to love despite wanting to slap her rose tinted glasses off her face. Her parents always treated her like a princess so she sought the life out, being an only child and the apple of their eyes. But there’s that little voice at the back of her mind; even when she meets her Prince Charming and gets the life of her dreams, something tells her a harsh reality is on the horizon. She takes a deep breath each time she rounds the corner and sees her house still standing there, waiting for her…Her fears are confirmed when life goes from zero to one hundred in an instant; Gayle has a lot of growing up to do and quickly too, because she has a child to think of.

This is a deeply moving and very touching story about life and its turns. It weaves different tenets of friendship, family, love, pain to create a story that evokes so many emotions. This is a story about the very best of friends who go through the ups and downs, grow apart and find their way back to each other.

Dusk to Dawn.
Moments at home.
Guys!! Guys!! We are getting the hell out of inside!!!
Spring!
Lisbon. Today I’m day dreaming about an open world. Getting on a plane again.
What restful Sundays look like.
Loading Comments...
Comment
×