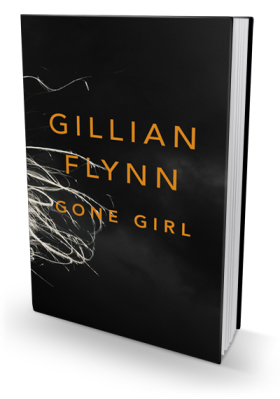 oh what a book. What a book. WHAT A BOOK. My mouth was gaping right till the very end because I’ve never read a book that left me so emotionally shattered and verbally speechless. Gone Girl messed with my mind, turned me out and flipped me over. If it were a movie, it would be the Usual Suspects meets Fatal Attraction with elements of CSI and Criminal Minds. In other words, it is mindbuggery on a staggering level.

Nick and Amy have been married for five years, three of those years have been blissful. They lived a charmed life in New York where Amy is something of a cult celebrity- she is the main character in a well loved children’s series- and Nick is the writer boy from the south who came to New York to make a go of it. They meet at a party, hit it off almost immediately, and eventually, get married. The plan is to live life happily ever after, because that’s what you expect when you meet your soul mate and you become Mr and Mrs “Cool.” Right? For a time it seemed their cool factor would see them gliding through the troubled waters of marriage, untroubled. And it does, until it turns ice cold.

Things start to unravel when they both lose their jobs and find themselves stuck together without a way out. They go through monotonous cycles of life without a clue how to move forward. That is until Nick decides they are moving to his little hometown of North Carthage in Missouri, to help his sister take care of their ailing mother.

That becomes Amy’s undoing. The truth is laid bare and she realises, the man she fell in love with is not the man she married. They both come to that realisation and something has to be done about it.

This psycho thriller, that unfolds over three parts, is a time-bomb waiting to go off but whose blast will be most catastrophic?

Part One; in marriage, everything is up for grabs. This is what Nick and Amy show us, on this mind bending journey. Nick returns home from his bar to find Amy gone. Vanished into thin air. Is she dead? Has she been kidnapped? Did Nick do something to her? We don’t know. The police are called in and Nick becomes the suspect. Although we are not sure of what exactly, because we don’t know what happened to Amy, through her diary entries, where Nick is dreadfully depicted, we quickly take sides and form solid alliances with her because the wife is always the wronged one. The long suffering doting party. And the husband is always despicable.

Part two; We are on a journey through those murky lines in a marriage. The battlefield; a struggle for power, sense of self and wits. What Flynn does ever so exceptionally, besides everything else, is to perfectly depict the rise and fall of a relationship; its beautiful start, promising middle ground and crashing end with a stupendous aftermath. We are taken through stages of Nick and Amy’s relationship, as they fall in and out of love with each other, skewering every layer, every maddening thought and every shocking revelation in their lives, especially Amy’s.

Not all is as it seems. Matter of fact nothing is as it seems. Have we been played? Is Nick really the unscrupulous bastard we thought him out to be? Is Amy dead? WHAT IS GOING ON?

Flynn tackles the issue of Love with such candidness and shatters the myth of happily-ever-after. She shows us how flawed love can be; sometimes shit happens and love is not enough to help the relationship last; no matter how perfect and “cool” you look together. As the story unfolds we begin to piece together the events that led to Amy’s disappearance and through the treasure hunt; a tradition she maintains on every anniversary, she takes us to places that serve a dual purpose, only Nick doesn’t realise this until its too late.

Suddenly everything changes and new alliances are formed. Nick sets off on a journey of his own to find out what exactly happened to Amy. It is a journey that takes us to her past where we discover much more than we bargained for and sends us back to the present where the truth is an even worse reality.

Part three; Is Love really all its cracked up to be? This is the unpleasant middle ground in marriage And when all is said and done, battles won and wars lost; who emerges the winner.

Read this book and don’t ever be the Cool Girl.

“Being the cool girl means I am a hot, brilliant, funny woman who adores football, poker, dirty jokes and burping, who plays video games, drinks cheap beer, loves threesomes and anal sex and jams hotdogs and hamburgers in her mouth, like she’s hosting the world’s biggest culinary gang bang while somehow maintaining a size 2, because Cool Girls are above all, hot. Hot and understanding. Cool Girls never get angry; they only smile in a chagrined, loving manner and let their men do whatever they want. Men actually think this girl exists…so many women are willing to pretend to be this girl…I’d want to sit these men down and calmly say: you are not dating a woman, you are dating a woman who has watched too many movies written by socially awkward men who’d like to believe this kind of woman exists and might kiss them…the bitch doesn’t really love chili dogs- no one love chili dogs that much! And the Cool Girls are even more pathetic. They’re not even pretending to be the women they want to be, they’re pretending to be the women men want them to be…” Amy Elliot Dunne. Gone Girl.