The Inauguration; Life, Liberty and the Pursuit of Happiness. 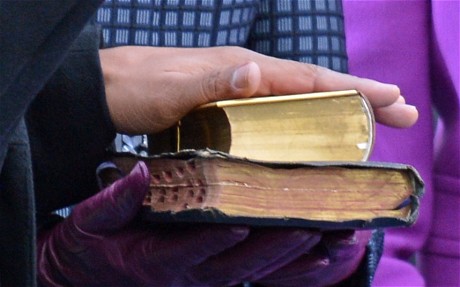 President Barack Hussein Obama was inaugurated into office for the second time on the 21st of January 2013 in what can be described as a moving and poignant ceremony. Made even more so because it fell on Martin Luther King Day. Mrylie Evers-Williams, widow of civil rights activist Medgar Evers who was killed by the KKK, delivered the invocation. The first woman to do so. She prayed for hope and peace, unity without discord and for the President to be able to bring the nation together.

The President took his oath swearing on the Bibles that belonged to President Abraham Lincoln and Dr Martin Luther King Junior. Richard Blanco, the openly gay poet was the youngest and first Hispanic poet to recite a poem at an inauguration. Supreme Court Justice Sonia Sotomayor was the first Hispanic to administer an oath of office for Vice President Joe Biden. US Rep. John Lewis (D) Georgia, a comrade of Dr Martin Luther King, one the few remaining people alive to have witnessed that iconic “I have a dream speech” was also at the inauguration. He said of the President swearing on the bible that belonged to Dr King; “moving, almost unreal…almost unbelievable…“

Besides being philosophical, President Obama’s speech was an acknowledgement of what makes America the “exceptional” nation that it is and a celebration of its diversity. In this moving speech, the President made referrence to defining moments in America’s history; The Seneca Falls Conventions of women’s rights in 1848 to the marches of the Civil Rights Movement from Selma to Montgomery in 1965. With his reference to the Stonewall riots of 1969, an uprising of the Gay community against the Police in New York, he openly and rightly acknowledged Gay and Lesbian rights as civil liberties. He also acknowledged the struggles of today; education, health reforms, employment…and asked for togetherness to overcome them.

This was not a speech about the specifics of politics or the economy, it was about reminding the country, its government and people, of the principles upon which the nation was built. About tapping into the heart of the matter.

I was not alive in the days of Martin Luther King Jr and Medgar Evers but my parents were and through them and other resources I’ve gotten an account of what life was like back then. Neither of them were alive during the days of President Abraham Lincoln, but the footnotes of the greatness of these men are left in today’s history. Many of the principles of what they stood for was high lighted in Barack Obama’s speech, most poignant of which was, a recognition of the right to “Life, Liberty and the pursuit of Happiness.” Whether one is  gay or straight, black, white or latino, man or woman, first generation American or immigrant, regardless of religious beliefs or political affiliations…all are equal before the law and the government has an obligation to safeguard that welfare.

And this was their call to action. Here’s hoping those words become actions.

1st of August. Let’s all just keep calm okay?
Banksy in the Ends.
It’s the weekend. A storm is rolling in.
Apparently a storm is headed our way and staying a while. So I’m soaking up the summer sun for as long as I can. Today was the perfect summers day. .
On the blog | What to watch- Searching for Italy from @cnnorigseries
Chantal Joffe @victoriamirogallery
Loading Comments...